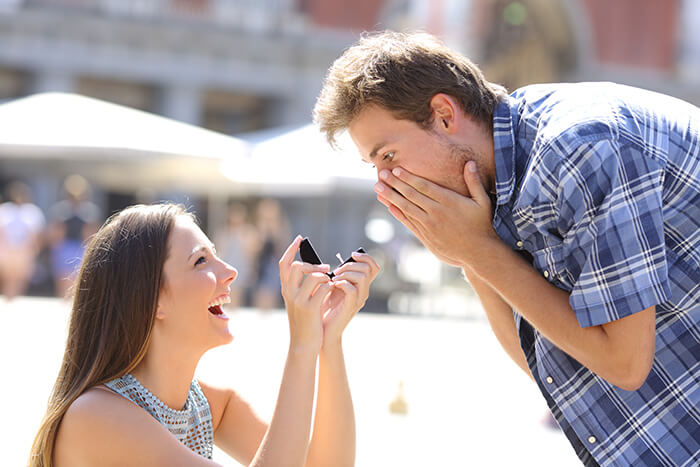 Are you Irish, a woman and thinking about proposing. Leap day is it! Read about why this was once a tradition.

Every four years the country is abuzz, and there is a flurry of activity. We are not talking about politics, but Leap Year. It is an ancient practice, dating back to Roman times. Have you ever wondered what the need is for an extra day at the end of February? It is a mathematic formula used to correct the modern calendar. But don’t worry, you won’t have to dust off the abacus or brush up on your 8th-grade algebra. We have broken down the basics of Leap Year and its fun traditions.

The modern Gregorian calendar, which serves as the standard calendar for civil use throughout the world, has both common years and leap years. A common year has 365 days and a leap year 366 days. A leap day occurs every four years, on February 29. It helps to synchronize the calendar year with the solar year. The Solar Year is the length of time it takes the earth to complete its orbit around the sun. The length of the solar year is about 365 ¼ days (365 days, 5 hours, 48 minutes, and 46 seconds, to be precise), which is longer that the standard calendar year of 365 days.

Because of the time discrepancy between the Gregorian Calendar and the Solar Calendar, every year we would lose approximately six hours. While that does not seem like much, after 100 years, the calendar would be off by 24 days! Time flies by quickly enough for us not to lose days.

Didn’t get the engagement ring you expected over the holidays or on St. Valentine’s Day? Well, this year you are in luck! According to an ancient Irish legend, women can propose to their guy every Leap Year. As the story goes, St. Brigid of Kildare, convinced St. Patrick, the patron saint of Ireland, to grant permission for women to propose marriage, every four years, on Leap Day, to suitors were too shy to propose. Is your fella to timid to pop the big question? Surprise him this year with a proposal of your own!

Not so much a tradition, but a superstition, it used to be considered unlucky to be born on a leap day in Scotland. And Greeks considered it a bad year to get married.

Let’s be honest, though, the best part about Leap Year is there is an extra day to do all the things you love! May we suggest coupling this momentous date with a juicy burger or succulent BBQ ribs? Chad’s has just what you need to satisfy that craving! And, while we might not be Irish, we fully support any proposal and think a guy would love his gal asking for his hand in marriage over a platter of spicy wings. Thank you February for sticking around.