How to BBQ the Right Way: Top Meat Cuts Showdown

How to BBQ the Right Way: Top Meat Cuts Showdown

In order to call yourself a true “pitmaster”, you’ve got to back it up with a certain amount of BBQ knowledge. Which means mastering some of those intricate barbecue terms. This includes knowing different meat cuts. For instance, pork tenderloin versus pork loin. Or, spare ribs versus baby back ribs. To help you expand your barbecue vocabulary, we’ve broken down some of the top meat cuts and their differences below. Let’s explore!

Although these two cuts of pork sound similar, they are actually very different in many ways. And, using the wrong cut in a recipe can spell disaster. Pork loin (above), roughly 2-5 lbs., is a distinguishably larger cut of meat compared to pork tenderloin, about 1 lb.

Also labeled as center-cut pork loin roast, pork center cut rib roast, and pork loin rib half, this cut is a larger piece of meat. A typical roast runs anywhere from two to five pounds. Pork loin can be purchased boneless or bone-in. And, although fairly lean, this cut comes with a lovely layer of fat on the top which keeps it moist. It is best grilled over moderate heat or seared and then slow-roasted in the oven or slow cooker.

Also known as pork tender or pork filet, this cut of meat is much smaller than pork loin (about 1 pound). Pork tenderloin is only sold as a boneless cut and is considered the “filet mignon” of pork. This cut is very lean and lends itself to quick-cooking or grilling. It also tastes great marinated or sliced in stir-fries.

2. Spare Ribs vs. Baby Back Ribs

Unlike pork loin and pork tenderloin, spare ribs and baby back ribs are fairly interchangeable in recipes without dire consequences. Overall, both cuts are best cooked low and slow on the grill or in the oven. 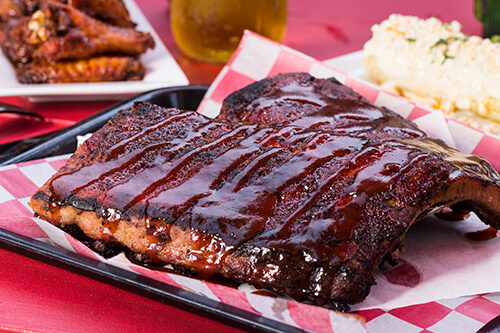 While spare ribs are longer and more flavorful than baby back ribs (above), “babies” are leaner and more tender.

Commonly labeled as pork loin back ribs or loin ribs, these beauties are cut from the upper ribs of the pig where the rib meets the spine. Interestingly, they’re called “babies” because they’re shorter than spare ribs (roughly 3-6 inches). A full rack weighs about 1.5- 2 pounds. In addition, baby back ribs are often more tender and leaner and often take less time to cook than spare ribs. Try Chad’s baby back ribs today, smoked tender and juicy served with our homemade BBQ sauce.

Also, know as St. Louis-style Ribs, spare ribs come from the belly of the pig. Each slab typically weighs about 2.5 pounds and contains a good amount of fat. Compared to baby backs, spare ribs have more meat between the bones and less meat on top. Spare ribs also generally have more marbling as well, which means more flavor. Not to mention, spare ribs are flatter than the baby back ribs, which makes them easier to brown.

Although both filet mignon and ribeye cuts are very popular, and expensive, they couldn’t be more unalike. It actually comes down to whether you prefer texture or taste. Rib eye (above) is full of juicy flavor thanks to its high fat marbling, while filet mignon is the more tender cut.

This cut of steak comes from the ribs of the animal, between the loin and shoulder. With lots of fat marbling, this steak cut is full of juicy flavor. Ribeye tastes best when cooked on medium heat. Most importantly, you only need a hint of salt and pepper to bring out its natural flavor.

Also called tenderloin, filet mignon is the most tender piece of meat on the steer. It also possesses an almost buttery texture. While the price tag suggests that it’s the best cut of meat, the very low-fat content means it’s lower in flavor. Overall, filet cuts are best when cooked no more than medium-rare. And, is often paired with bacon or gravy for additional flavor.

Fill Up at Chad’s BBQ in Edgewater, MD

Regardless of which cut of meat you choose, most of us can agree that barbecue meat is undoubtedly tasty. So, now that you know the differences in your favorite cuts, go grab the tongs and get cooking! But, if you’d rather let someone else do the cooking, get your fix at Chad’s BBQ. Our perfectly smoked barbecue is served with delicious house-made sauces and sides to match. Contact us at (410) 956-7774 to place an order for pick up.