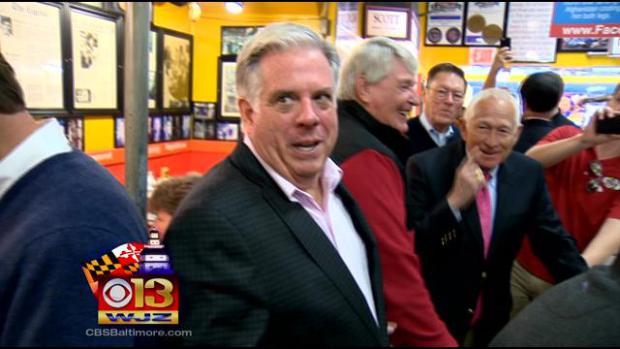 One of Hogan’s favorite stops is Chad’s BBQ in Edgewater, a short drive from his house. He loves all the food, but his favorite may be the smoked chicken wings, said Terry White, the restaurant’s hostess.

Maybe the campaign magic is in the barbecue sauce.

Governor-elect Larry Hogan managed a whirlwind effort in which he defeated Democratic Lt. Gov Anthony Brown in what some including New Jersey’s Republican Gov. Chris Christie, who came to Maryland to campaign with Hogan have called the biggest Election Day upset in the country.

Democrats have a 2-to-1 advantage in voter registration in Maryland.

Before Tuesday, an Anne Arundel County resident hadn’t been elected governor since before the Civil War.

Prior to becoming governor-elect this week, Hogan was just “Larry” to his Edgewater neighbors, who also called him “excellent,” “honest” and “down to earth.”

He had built his business, the Hogan Cos., into a real estate development firm that has completed $2 billion in transactions, including a deal with National Harbor in Prince George’s County.

One of Hogan’s favorite stops is Chad’s BBQ in Edgewater, a short drive from his house. He loves all the food, but his favorite may be the smoked chicken wings, said Terry White, the restaurant’s hostess.

White said Hogan has been coming to the restaurant for more than seven years, since it was known as Wharfside Bar and Grill.

The onetime state appointments secretary “comes in with his wife all the time this is his neighborhood place,” White said as she served cheese steaks to customers. “He is just a regular guy. Very approachable. He never presented himself as a politician.”

Chad’s, at 158 W. Central Ave., has walls covered with record jackets of The Beatles, Steely Dan even the score of “Star Wars.”

The place smells of mustard and vinegar; the customers chow down on wings, pork and chicken. A tall metal rooster guards the parking lot.

Hogan kept coming to Chad’s during his campaign, and the way he acted there never changed, owner Chad Sargent said.

“Honestly, he is just a very nice man,” Sargent said. “He is just like a regular customer. He is Larry. Someone called him ‘Mr. Hogan’ one time, and he said ‘No, no, call me Larry.’ ”

Just down the street is Rolling Road, where Hogan’s 3,121-square-foot property is on Beards Creek. According to Zillow, the home sits on 2 acres and has two bathrooms and a deck. A state trooper was posted outside the home Wednesday, to protect the next governor.

The security detail’s arrival, Hogan said Wednesday during his post-election news conference at The Westin Annapolis hotel, was the moment what had happened the day before became real.

“Even though I was confident, and we knew there was a path to victory from Day One, when nobody else believed, we knew it was nearly an impossible thing to pull off,” he said.

“It was sort of surreal, I got to tell ya. It still was kind of a shock…”